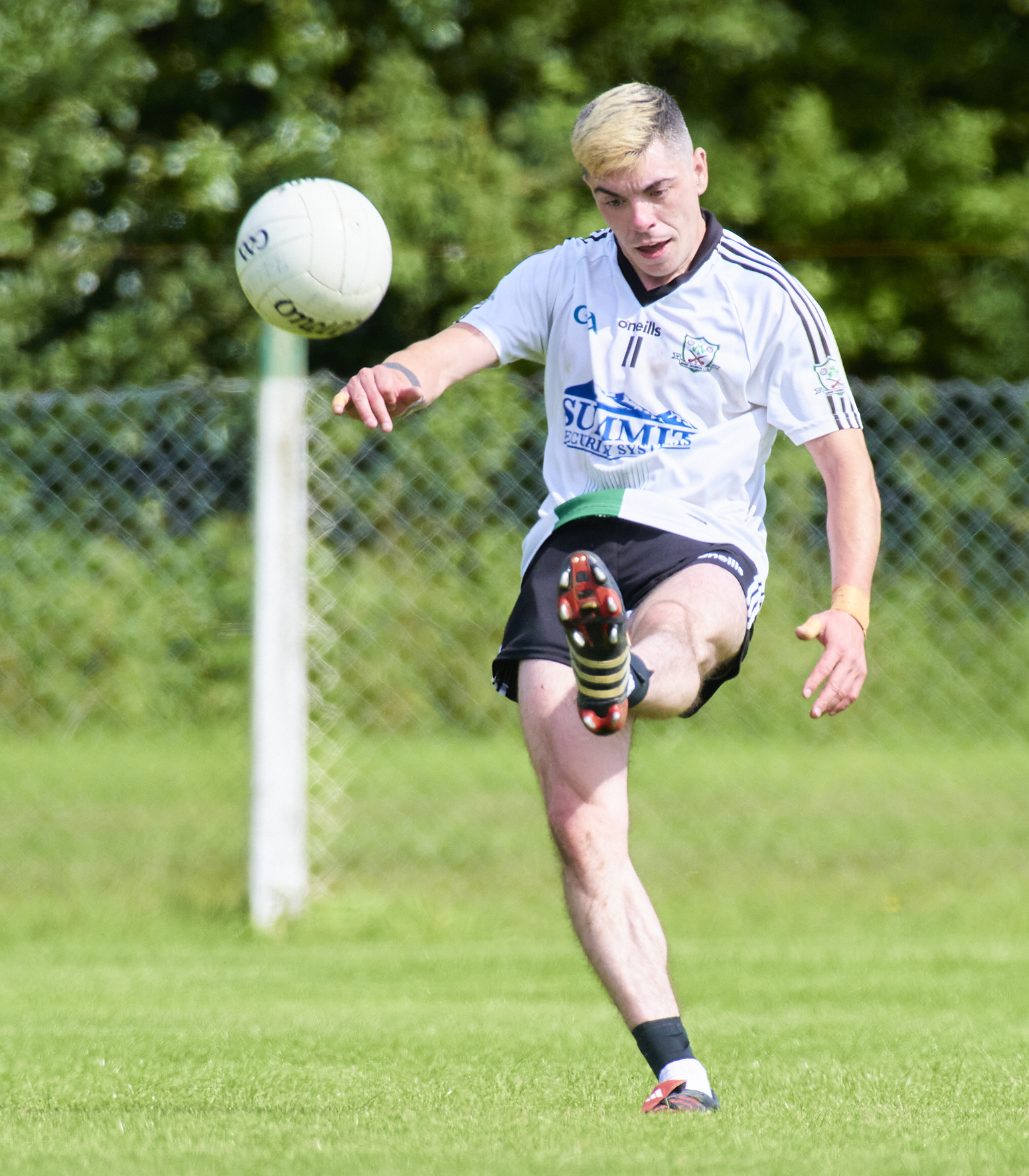 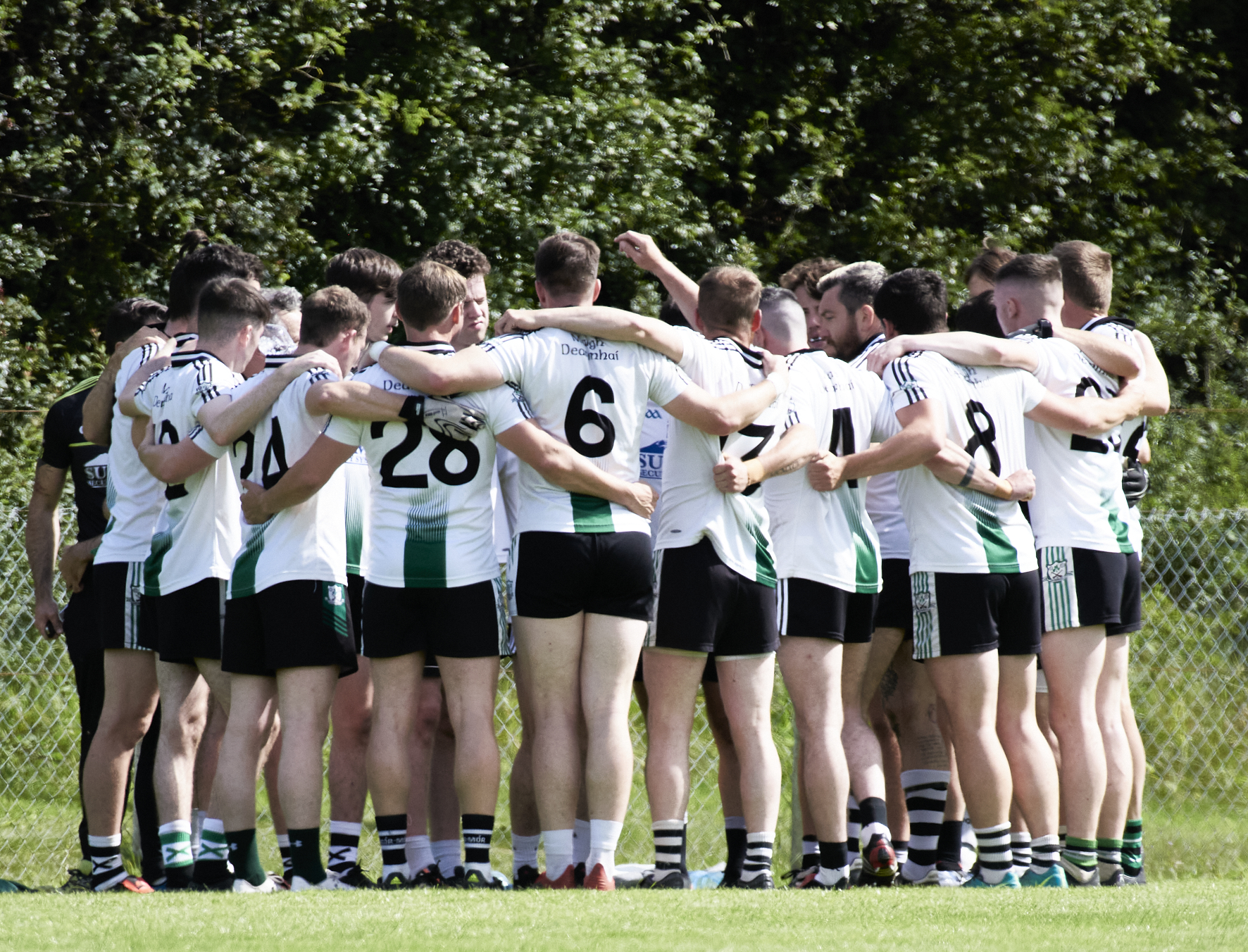 The season we thought would never start; for Longwood’s footballers it has become the season they wish would never end.

On a beautiful day in Bective, Longwood registered their first competitive victory since the 2018 Intermediate Championship Final. In an amazing coincidence, our opponent on both occasions were the valiant warriors from Ballinlough.

In fairness, the bare statistics do not tell the full story. Longwood have given a number of excellent performances in the intervening period; late goals have denied them victory on more than one occasion while there was no shame losing to senior powerhouses such as Summerhill and Ratoath.

But for today, let us savour the sweet taste of victory.

Longwood started somewhat nervously, a couple of early wides did not help and Ballinlough were quick to seize the initiative slotting over consecutive points to take a two-point lead after just five minutes. Longwood looked as though they would open their account on seven minutes when the referee awarded them a free but Ryan Moore’s kick rebounded off the posts and was cleared to safety. An omen for what was to follow? Well if it was, nobody mentioned it to Moore. The left-footed magician would build his very own “highlight” reel over the following hour.

The men from south Meath opened their account on nine minutes when Thomas Coloe, who has really grown into the full forward role this season, kicked a fine point from play. Ballinlough responded with a point from play to stretch the lead out to two points once again. At this point, the Ballinlough forwards were looking increasingly dangerous. To their credit, Longwood’s management team of David Flynn and Enda Dixon were quick to identify the potential threat and made a number of positional changes at the back and these proved to be decisive. A point from play from the lively Gavin Griffith was followed by a Mickey Burke free and, with seventeen minutes on the clock, the teams were level.

Just before the water break, Longwood were dealt a hammer blow when Ross Kerrigan was shown a black card. Kerrigan, one of Longwood’s finest young dual players, would have to sit out the following ten minutes. Being a man down for ten minutes on such a warm day would rock most teams. Initially it seemed that it would negatively effect our boys as Ballinlough converted two frees within a couple of minutes. But when the chips were down, Longwood’s leaders stepped up. Sean Coloe started to dominate around the middle of the park, winning numerous kick-outs (credit to the accuracy of Kevin Maguire) and setting up attack after attack. Damien Healy, ably supported by his brother Anthony, made several of his customary charges up the field. But it was Ryan Moore who took it upon himself to become tormentor-in-chief of the Ballinlough defence. In the closing seven minutes of the first half Moore, who by now had relocated to the full forward line, kicked four points, three of which came from open play. In fact, such was his confidence, he even kicked one majestic point off his right foot. A collector’s item indeed.

A Ballinlough point from play was cancelled out by an excellent Mickey Burke free to ensure Longwood took a lead to the half time break.

When play resumed, Ballinlough were first to trouble the scoreboard, kicking a point within sixty seconds of the restart. Longwood’s lead was now just a solitary point. Ballinlough pushed forward seeking an equalising point. It looked like it might arrive only for Damien Healy to courageously block down a shot that looked destined to split the posts. Amazingly after a number of slick passes through the hands, Healy found himself in possession of the ball deep inside the opposition half before kicking a beautiful point off his left foot. A score that any forward would’ve been proud of. As inspirational scores go, this was right up there.

Within a minute Sean Coloe, magnificent throughout the game, kicked a fantastic point from outside the 45-metre line. Longwood were now three points ahead and looking like they were about to kick for home.

But the Ballinlough boys are nothing if not resilient. Within two minutes they were back in front, a point from play complemented by an excellent finish to the back of the Longwood net.

While it seemed like a major turning point, Longwood were quick to respond. A Ryan Moore free from the right touchline hung in the air and as Gavin Griffith attempted to launch himself to catch the dropping ball, he received a nudge in the back. A foul had taken place, but was it inside or outside the square? The referee rightly consulted with his umpires before extending both arms to indicate a penalty had been awarded to Longwood. Cometh the hour, cometh the man……….in this case the man was Sean Coloe. Longwood's midfield powerhouse kept his composure before sending the keeper the wrong way with a beautifully executed penalty kick.

Both teams now resembled two prize fighters as they exchanged blows in the hunt for victory.

Peadar Byrne was introduced for Ballinlough and the former Meath star was quick to make an impact with an excellent point from play. Again Longwood responded, this time with two quick-fire points from play from Harry Hogan and Ryan Moore.

Longwood were three points clear with eight minutes left on the clock. The teams traded scores over the remaining minutes with Longwood’s last three points coming from Moore and the brothers Coloe. A second yellow card for Moore could barely detract from his outstanding performance.

As we entered a seemingly endless period of injury time, Longwood supporters could be forgiven for fearing the worst, but credit to our heroes who defended as if their lives depended on it. A flurry of late Ballinlough attacks were thwarted and the final whistle was greeted with a mixture of joy and relief.

It was an absolute pleasure to witness a Longwood team deliver such an outstanding performance in a game that really mattered. The displays of Ryan Moore and Sean Coloe will live long in the memory. It is just a pity there wasn’t more of a crowd in attendance to applaud our heroes off the pitch, for they truly deserved it. But these are the times we live in.

So Longwood finish off their football championship season on a winning note. To finish on a high was incredibly important for our boys. In addition, it was tremendously positive to see young players like Adam O’Brien, Gavin Griffith, Conor Molloy and Cathal Campbell graduate to the senior panel and perform with great credit.

Huge congratulations to all our players and the management team. As always they gave everything for the club!

Having secured their Intermediate Football status for 2021, Longwood can now switch their focus to the small ball for the coming weeks. If the boys can attack the remaining games in similar fashion to what we witnessed today, we can have no complaints.

Eyes on the ball - Sean Coloe soars to the clouds! 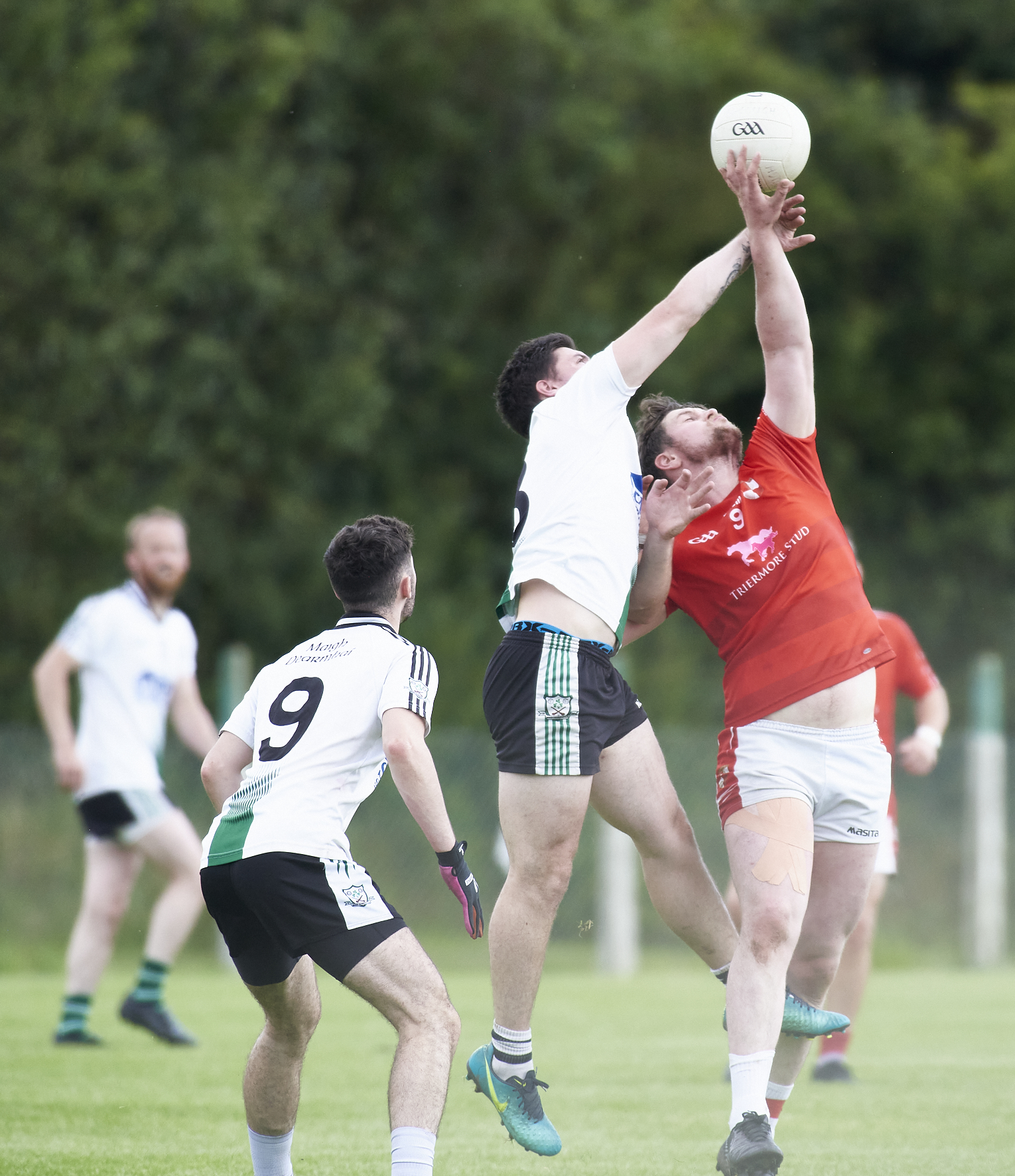 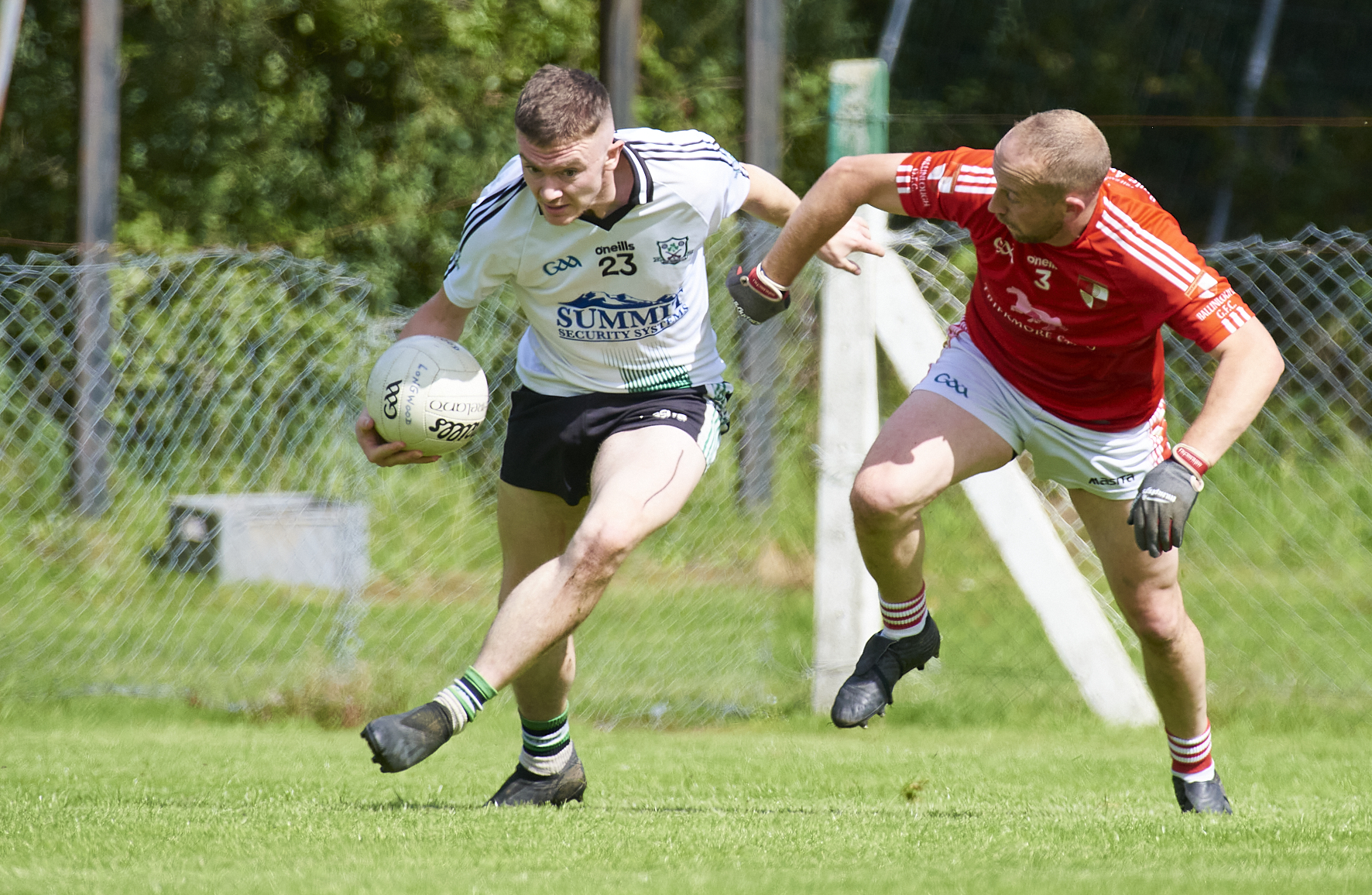 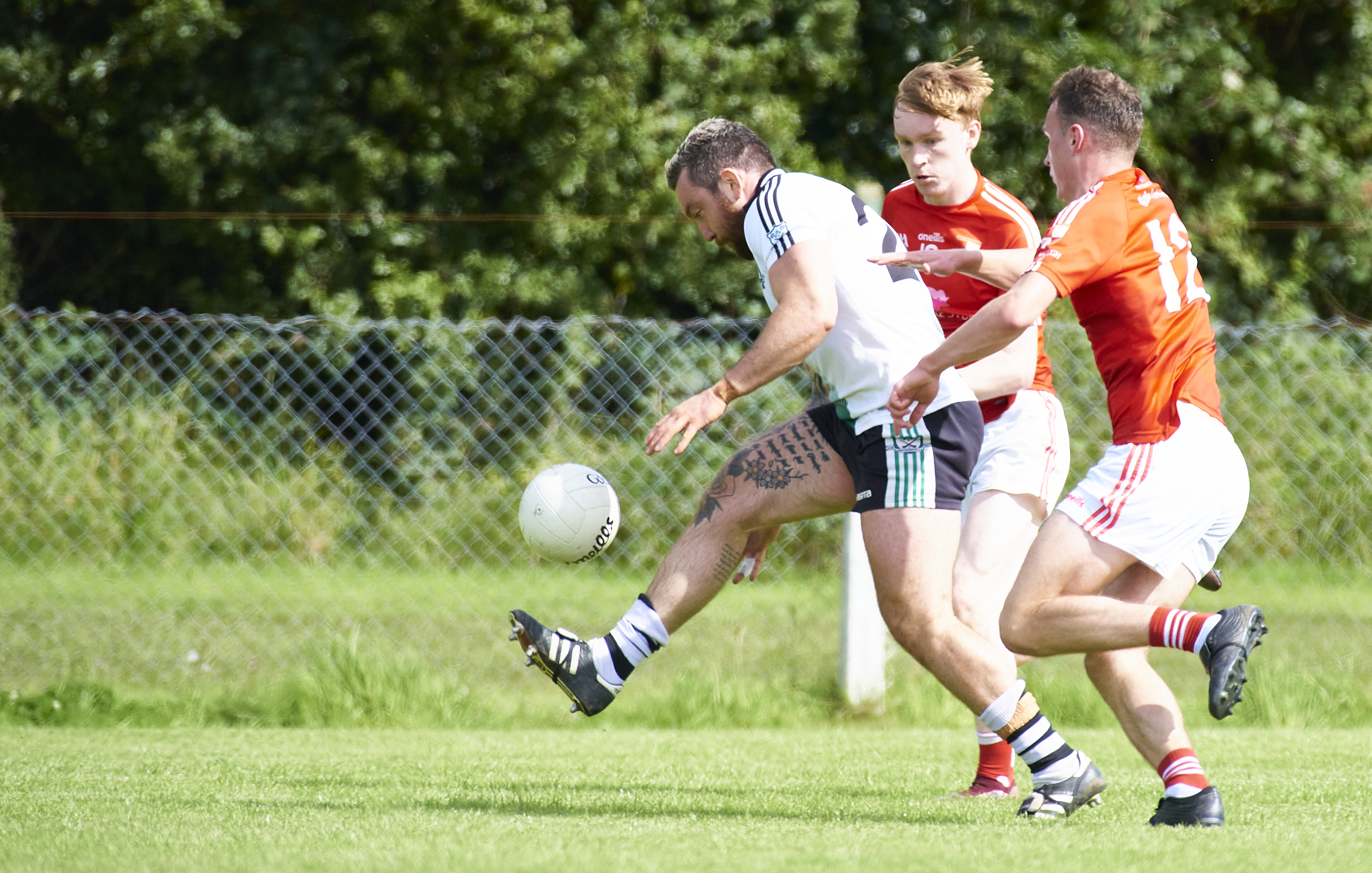