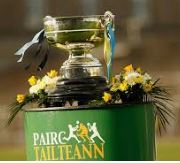 With a permitted limit of just 200 allowed into each match venue, Meath GAA clubs will be allocated just 55 tickets to distribute to their supporters for each championship game.

In addition, each club will get 32 complimentary tickets to cater for players, mentors and officials.

Only supporters with a ticket will be allowed into the game and all tickets are priced at €10.

There will be no concessions for children, students or OAPS.

SFC, IFC, JFC, SHC and IHC games will be all ticket.

One saving grace may be that there are plans in place to stream games held in Pairc Tailteann at a cost of €6 per game. Longwood's opening championship game is due to take place in Páirc Tailteann on August 1st so hopefully our supporters who cannot get to the game, will be able to watch the game live via the internet.

We can only hope that by the time the second round of championship games come around, the numbers permitted to attend matches will be extended to 500.