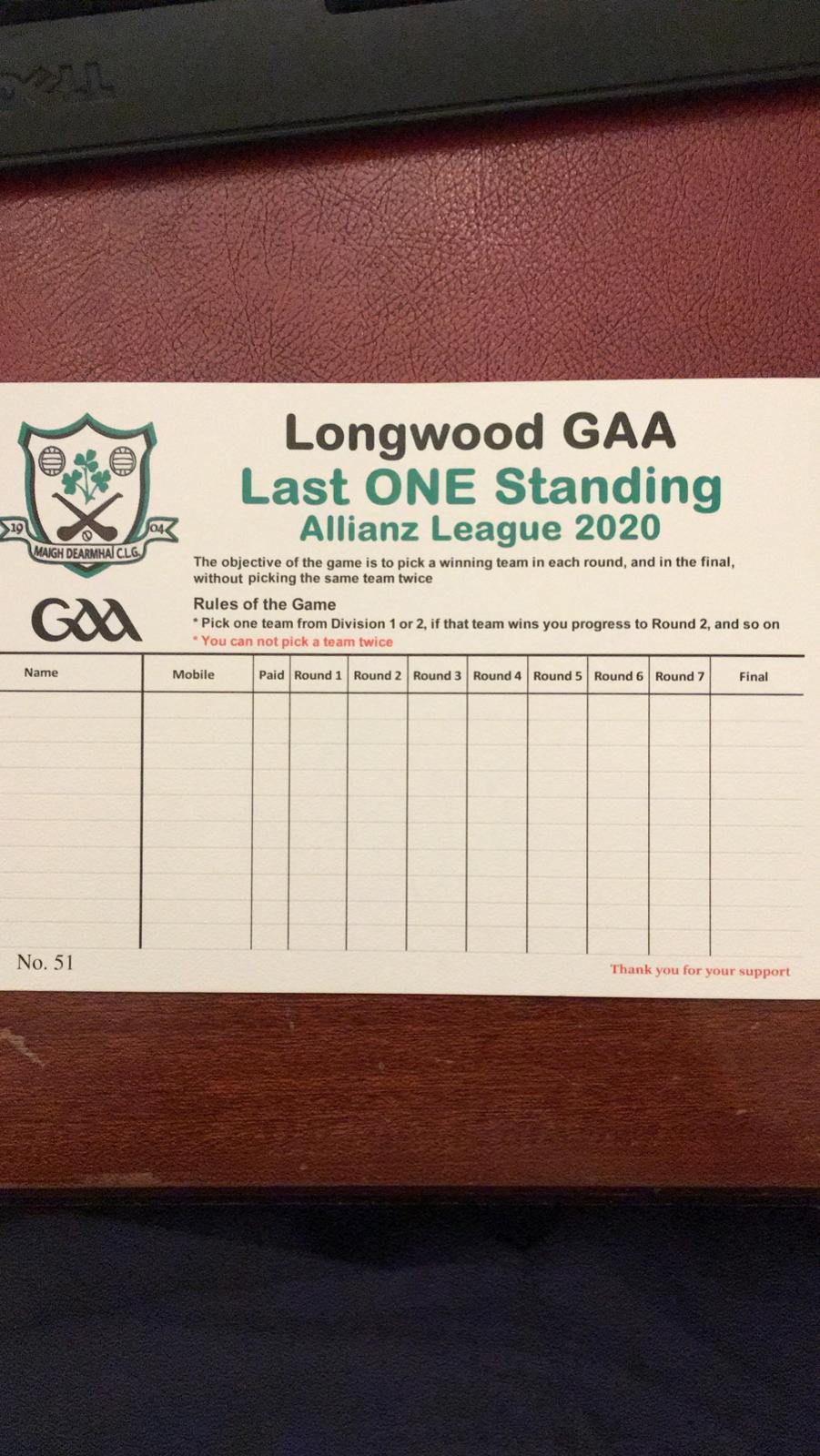 11% of the 205 competitors who started in round 1 remain in Longwood LMS. While there were no major surprises in Division 1, Division 2 continues to provide many with headaches. One man who had a sore knee instead of head last weekend was our very own expat, Rory Maguire. He certainly wasn’t willing to chance Laura proposing this being a leap year. Rory wooed his sweetheart after a buffet breakfast in Adare Manor. His great choice of fiancé mirrors the good decisions he has made in Last Man Standing. It is suspected that Rory has struck a good deal with JP McManus for a winter wedding in 9 months time for 500+ guests. Longwood GAA sends Rory and Laura the heartiest of congratulations and wishes them the all the best for the future. Incidentally, Rory and Malachy were the only two sharks to foresee Galway’s victory over Tyrone.

On Saturday night Dublin proved relentless yet again with a hard earned and hard fought victory against the luckless Tir Chonnail men. Evan Comerford has fitted into Stephen Cluxton ‘s ‘gloves’ very well with three point blank saves from the Donegal men. Cavan continued their winning ways with a valuable victory against Fermanagh on the same night with Gearóid Mc Kiernan to the fore, scoring 5 points. Nine people chose Dublin and they may have spent the second half glued to Twitter for updates. At one point it was looking like Donegal’s to lose. You all owe John Small a fiver. Not one LMS competitor chose Cavan or Donegal to win. An unfortunate trio put their faith in Fermanagh.

Sunday's feast of football began with an early throw-in down Killarney way where Meath put in a battling performance before eventually succumbing to a star-studded Kerry team. Meath’s direct opponents proving to be somewhat annoyingly popular again with 5 people backing Kerry. Galway footballers inflicted the worst defeat of Mickey Harte’s career when beating a strong Tyrone team by 19 points in Tuam. Two time Celtic cross winner, Padraig Joyce, is certainly having a positive impact on this talented Galway team.   Banty McEnaney’s  Farney men had a convincing victory over Mayo with Conor McCarthy’s eye-catching performance proving that they are certainly no one man team. Only three of you predicted this result.

Fifteen LMS competitors risked predicting the ‘graveyard’ that is Division 2. Olivia Foran, who bravely chose Laois to beat Clare in Ennis, is the only one of these still standing! Performer of the week goes to Olivia. Brendan Rouse is casualty of the week having chosen Armagh, who drew in Mullingar. Brendan had the added pain of his beloved Mayo going down to Monaghan. Mayo are reigning Division One champions and perennial survivors though. Keep the faith Brendan, who knows who will get the chop?

Meath’s backs are very much to the Wall this weekend with Galway coming to Páirc Tailteann. A loss would surely seal Meath's fate. Elsewhere, Mayo welcome Kerry to Castlebar, Dublin travel to Healy Park in Omagh and an all Ulster affair takes place between Donegal and Monaghan. Chose a Division two team at your peril!

Longwood to host visitors from Mayo in Féile Na nGael

The excitement around Féile Na nGael 2020 went up a notch...