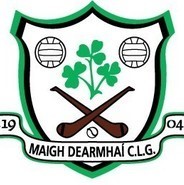 Longwood suffered what was ultimately a comprehensive defeat at the hands of Moynalvey at a gloomy Summerhill on Tuesday evening. The grey skies overhead gave a distinctly autumnal feel to the evening, indeed it became relatively dark midway through the second half making conditions a little more difficult for both teams. The slippery underfoot conditions also posed problems with many players losing their footing throughout the contest.

While the final score may indicate that it was all one-way traffic, the truth is that when Longwood drew level five minutes into the second half it looked as if the two precious championship points were very much up for grabs. The game-tying score was that rare commodity, a right-footed finish from ace marksman Ryan Moore. It came at the end of a flowing move, initiated by an excellent Ross Healy save, and seemed to give Longwood a strong foothold in the game.

Unfortunately from a Longwood perspective, it proved to be a false dawn. Moynalvey, displaying the experience of a team with a number of senior championship campaigns under their belt, responded to the goal with three quick points. Indeed their efficiency in front of goal was a noted feature throughout the hour. An Anthony Healy free reduced the deficit to two points but a brace of Moynalvey goals within two minutes, midway through the half effectively ended the game as a contest. It proved, if proof were needed, that senior football is a ruthless business.

Injuries to Joey Stenson, who was giving a typically defiant performance, and Thomas Coloe followed by a second yellow card for Chris Lynch compounded the situation to a degree but in all honesty the game was up for Longwood at that stage.

A late free from Ryan Moore gave Longwood the final score of the game and, as always, the boys gave everything right to the final whistle.

Those responsible for arranging championship fixtures have decreed that Longwood take to the field again this coming Saturday when the boys face up to Ratoath in the next round of the Senior Hurling Championship. Allowing just 3 days for amateur players to recover between championship games seems extreme, particularly with our panel of warriors already stretched to near breaking point. Here's hoping that the lads will recover quickly for the next challenge.