U15 Footballers edge out Dunboyne in League Final thriller 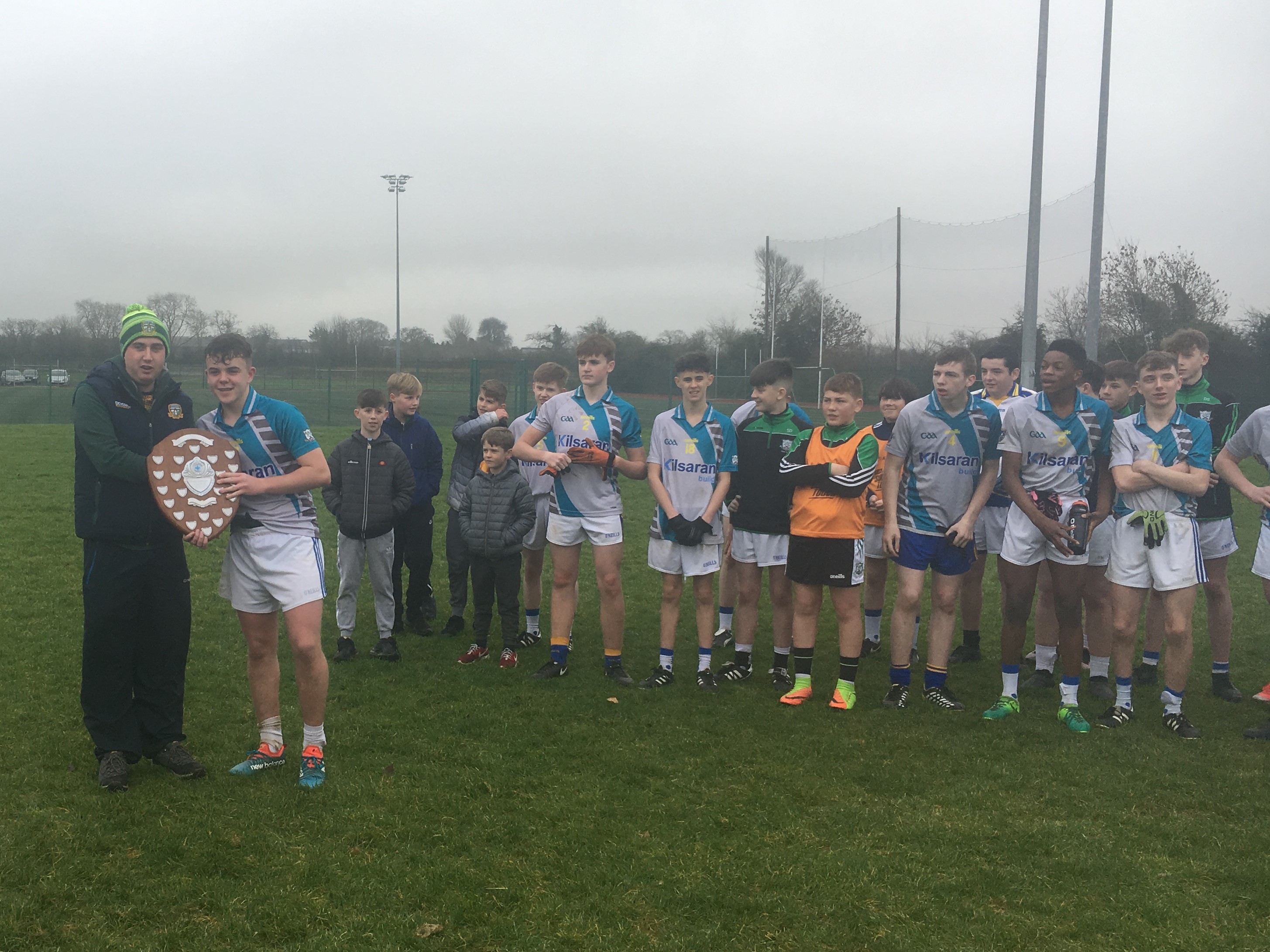 Longwood/Clonard's U15 footballers capped off a truly memorable season with victory over a gallant Dunboyne team earlier this morning in Dunganny.

The supporters who made their way to Dunganny for the early start time of 10.00 were rewarded for their efforts as they witnessed an epic contest between two evenly matched teams.

The teams were familiar rivals having crossed swords earlier in the group stages of the competition when Dunboyne had run out comprehensive winners. This served as a key motivating factor for our boys; they reckoned that with a near full strength panel on this occasion they could really put it up to their opponent. How right they were!

Dunboyne settled quickly with a pair of points before Longwood/Clonard registered their opening score. Crucially it resulted in the raising of a green flag after the Connolly boys, Tadhg and James, combined before the latter dispatched the ball to the net. Any semblance of nerves had now evaporated, and both teams set down to the task at hand.

The next five minutes were an exact replica of the previous five as Dunboyne scored two points only to see a Connolly goal, this time a clinical finish from Tadhg, wipe out their advantage.

The teams exchanged scores for the remainder of the half with a Brandon Martin point ensuring our boys took the slenderest of leads to the interval on a scoreline of 2-3 to 0-8.

Longwood/Clonard signalled their intent early in the second half by kicking an early point before suffering a sucker punch as Dunboyne scored a somewhat contentious goal as the scorer appeared to be in the square prior to the ball being kicked towards goal. A lesser team may have buckled but the boys remained calm and less than two minutes later Scout Hanna won possession on the fourteen-yard line before drilling a low left-footed shot to the bottom the net. The big support from South Meath roared their approval.

This spurred the team on and they dominated the next 10 minutes. Sam King's unerring accuracy from frees and a superb point from play from James Connolly saw them extend their lead to 4 points as the game approached the closing minutes. The lead looked relatively secure, but a fortuitous deflection saw the ball end up in the Longwood/Clonard net and the deficit was now down to the bare minimum. We were going to have to endure a tense finish and injury time was at the discretion of the referee. As minute after excruciating minute passed, the tension grew. A high ball into the square somehow found its way to the back of the net. Before we had a chance to reflect on the cruelty of what had happened, the referee and umpires consulted and deemed that an infringement had taken place in the square. The sense of relief was palpable. Seconds later the final whistle was the cue for a mass invasion as players, mentors and supporters embraced in joyful celebration.

Victorious captain, Sam King, rightly afforded due respect and credit to Dunboyne for their contribution to what was a fantastic contest. Both teams had given everything, taking their opponents best shots before countering with their own. We can only be thankful that when the dust settled, our boys came out on the right side of the scoreline.

The players deserve enormous credit. They played with tremendous skill and heart, displaying a positive attitude throughout the game. They faced up to adversity and never wavered in their belief that this was going to be their day.

It can sometimes be churlish to single out individuals in what is ultimately a team game but a number of players deserve special mention for their performance. Foremost amongst these was Justin Coyne who gave a towering performance from centre back. In addition to a fantastic display of high fielding, Coyne’s distribution to his forward line was impeccable and he drove the team on from start to finish. Another unsung hero, Jim Bob Leigh, gave a masterful exhibition of tough, uncompromising defending, breaking up numerous Dunboyne attacks. The midfield pairing of Sam and Doey worked tirelessly throughout the hour and the twin pronged attack of Tadhg & James Connolly caused untold damage for the Dunboyne rearguard.

But in truth this was a complete team performance. The entire panel pushed each other on throughout the past few months and each player deserves their moment of glory. They are a credit to their families and communities.

A special mention to Ciarán Sheridan who unfortunately was unavailable for the final. Ciarán made a huge contribution to the team’s success throughout the competition, most especially when he excelled from midfield in the semi-final win over Gaeil Colmcille. Ciarán’s disappointment at missing the final will surely be tempered by the knowledge that a winner’s medal awaits him.

The management team of Stephen King, Kevin Moriarty, Finn Coloe and John Crum are to be greatly commended for their hard work and dedication to this group of players. Preparing a team to deliver their best performance on the biggest of days is no easy task but that is exactly what they achieved. Well done lads.

As they retired to the sanctuary of the dressing rooms, there was a special treat in store for the players. As is customary, a member of the defeated backroom team comes in to address the victors. Dunboyne’s representative was none other than the living legend that is Seán Boylan. The four time All Ireland winning manager was afforded due respect and reverence. He praised the Longwood/Clonard players, opining that they fully deserved their victory on the day. They were the better team, played an excellent brand of football, maintained their discipline and embraced the physical side of the game, tackling hard but fair, at all times. Such words from a man of this calibre can only serve to inspire our boys in the years ahead.

So the final curtain comes down on what has been a truly memorable season. That the last game would see another trophy spend the winter months in Longwood and Clonard is a fitting reward for all the hard work during 2018.

If 2019 can be half as successful as this year then we have a lot to look forward ! 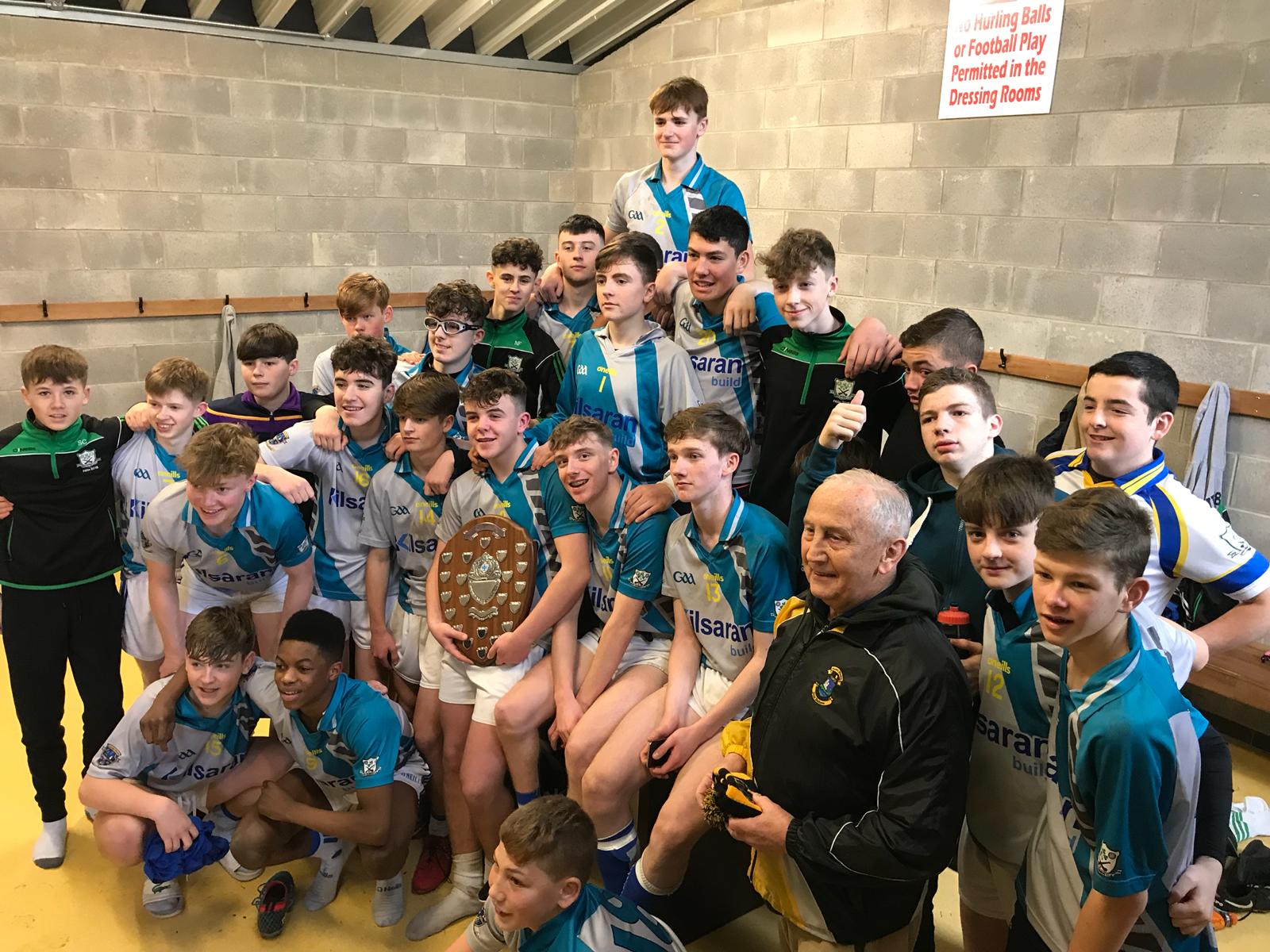