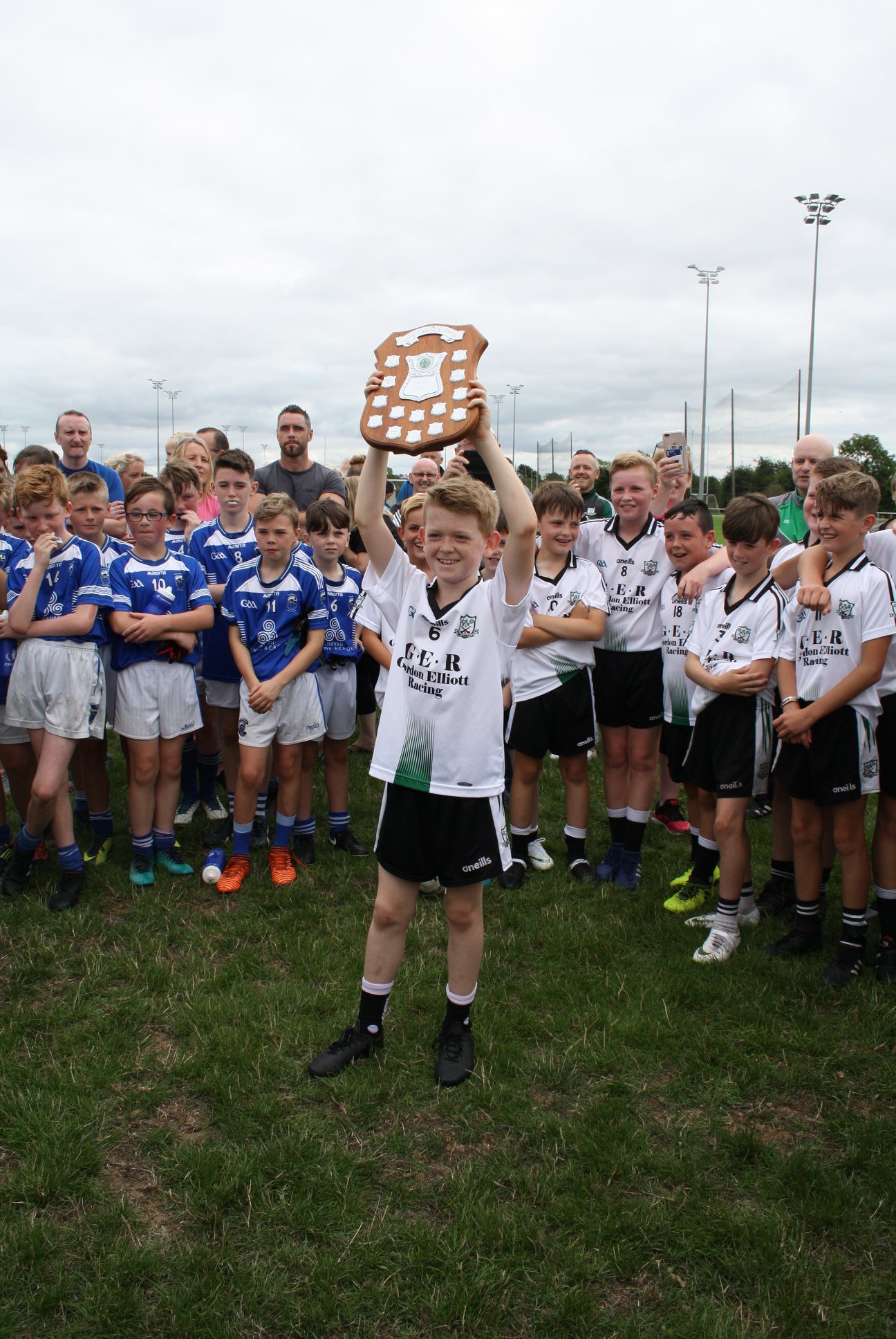 Longwood's U12 footballers completed the double in Dunganny on Saturday, adding the Summer League title to Spring League won earlier in the year, against their neighbours from Boardsmill.

In doing so, these young heroes managed the remarkable feat of going through the season unbeaten.  While we appreciate that winning is not everything, particularly at such a young age, the achievement of going through two tough League campaigns without defeat is well worth acknowledging.

Saturday's final was played in front of a large crowd as the communities of Longwood and Boardsmill rightfully came out to support the teams.  Boardsmill were quicker to settle and registered the opening score after just 2 minutes.  Longwood appeared nervous in the opening minutes and it took an excellent point from midfielder Malachy Fisher to settle the boys in white.  From there on, Longwood seized control and started to dominate proceedings. Points from Fisher, Ben McLoughlin, Laoghaire Connolly and captain Conor Dixon ensured that their dominance was adequately reflected on the scoreboard.

Boardsmill battled valiantly and responded with a point but Longwood were now in full flight, playing some delightful attacking football as they worked the ball quickly through the hands and habitually picked out the player in the best position to take a score.  A series of points from McLoughlin, Connolly and Fisher kept the scoreboard ticking over, all the while extending their advantage.  When the referee blew the half-time whistle, the advantage was out to 10 points.

The opening minutes of the second half saw the teams exchange points before Longwood again assumed control.  Their forwards were on top for the majority of the game; while Ben McLoughlin and Laoghaire Connolly inflicted much of the damage on the scoreboard, the workrate of Caragh King, Conor Dixon and Luke Brady was every bit as important.

The defence, superbly marshalled by inspirational captain Conor Dixon, worked incredibly hard throughout, closing down space and tackling with tenacity.  Every Boardsmill score was hard earned as they struggled to deal with the defensive shield personified by Adam Peacock, Cian Colgan, Harry Leigh and Cian O'Sulivan.  Behind the defence, David Dixon performed competently and initiated many attacks with his accurate kick outs.

The final whistle was greeted with scenes of joy and jubilation as the Longwood supporters invaded the pitch to congratulate the victors.  These fine young players certainly deserved the plaudits.

A special note of thanks to Caragh King and Eve Mooney; both girls have been very important members of the team over the past couple of years and it's only right that they will have some silverware to show for their efforts.  We wish the girls well for the future and have no doubt they will make an enormous contribution to Longwood's juvenile LGFA teams in the years to come.

A special word of thanks to Gordon Elliott for very kindly sponsoring a set of jerseys for our U12's earlier this year.  The jerseys have proved to be incredibly lucky and we are most appreciative.

A big thank you to the large contingent of Longwood supporters who came out to support the team on Saturday.  It was great to witness the scenes at the trophy presentation and I'm sure the crowd helped to elevate the performance of the players.  And most importantly, as mentioned by our captain in his fantastic acceptance speech, a huge Thank You to all the parents for their support through the season.

And so the U12 season comes to a close.  Many of the players will remain active over the coming months as the U13 Leagues commence towards the end of August.  Indeed many are heavily involved with the U14 panel who face up to Boardsmill again on Monday evening in the semi-final of the U14 League.

2018 has been a fantastic season to date for Longwood GAA, here's hoping there is more to come!!

The latest We Are Meath podcast, hosted by David Rispin, ...

Due to the ongoing inclement weather, Longwood's GAA pitc...

Busy weekend ahead for Royal Gaels

With Valentines Day and Storm Dennis now in the rear-view...

As we wait around, thanks to the inclement weather, for ...

Meath host Kerry in Round 3 of the National Hurling Leagu...

Last Man Standing (LMS) - Round Three trips up a few

As a mark of respect to the Foran family on the loss of ...