Division 1 League Glory for U16 Hurlers 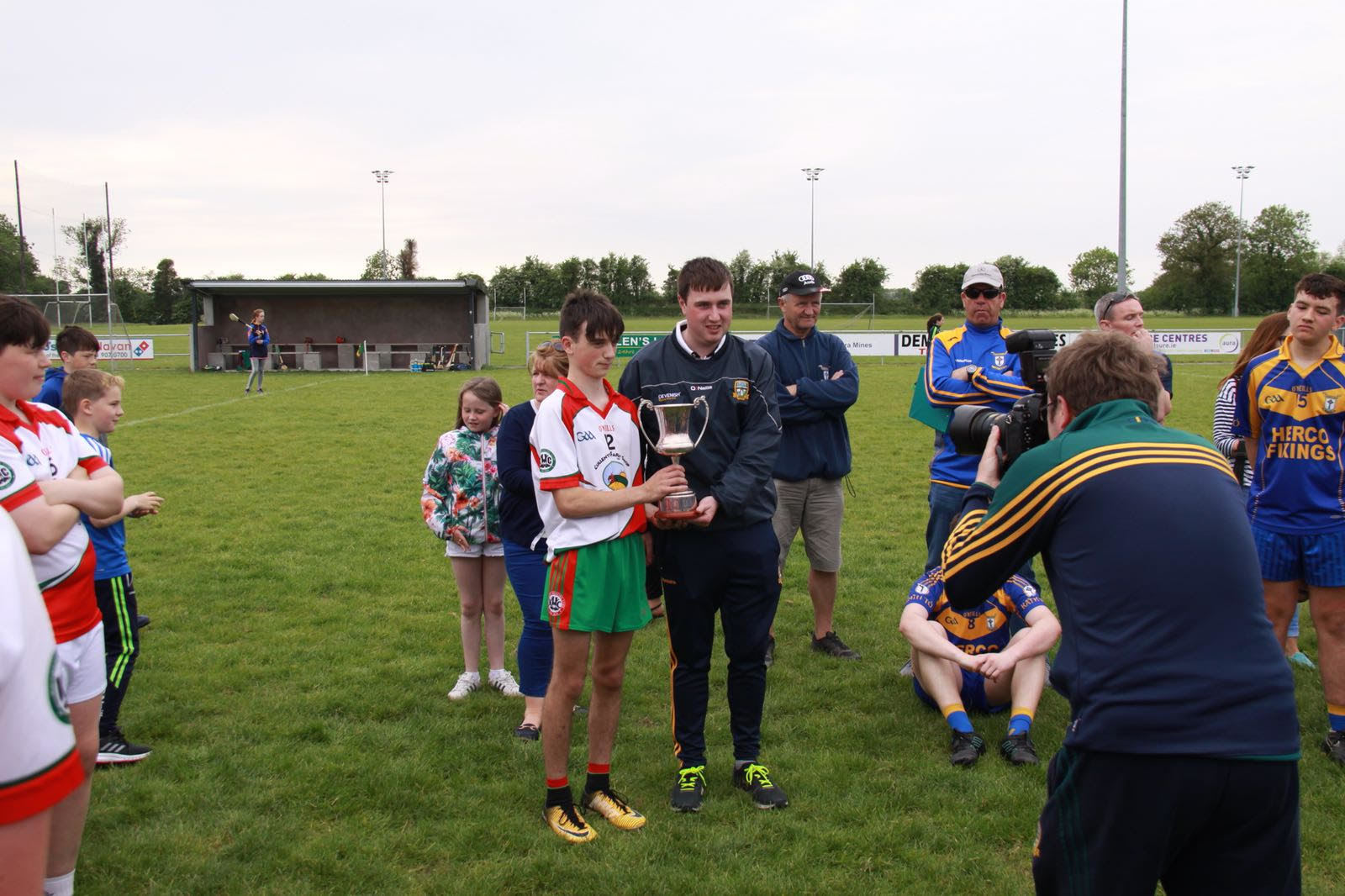 Published: about 2 years ago

A game of two halves, that oft used cliché, was never employed more appropriately than for last Saturday’s thrilling U16 Hurling Division 1 League Final, when Longwood/Killyon overcame Ratoath in a titanic struggle in Dunganny.

Even the most ardent Longwood & Killyon supporters would surely have held out little hope for their young hurlers as they trailed a slick Ratoath outfit by 11 points at halftime.  But these young heroes had shown in the previous week’s semi-final that they embodied the old Meath never-say-die spirit and they repeated the dose on the highest of stages to snatch victory from the jaws of defeat.

Longwood/Killyon settled well and posted the opening score when Justin Coyne, who was to have an eventful afternoon, pointed from play.  Rather than settle the team, this seemed to stir Ratoath into life and they raised four successive white flags to lead 0-4 to 0-1 after 10 minutes.

Despite a couple of excellent points from Coyne and Shane Dixon, Ratoath controlled the remainder of the first half, dominating possession and taking scores at will.  They scored what appeared to be a crucial goal in the 24th minute and followed this up with another run of four unanswered points to  lead by 1-11 to 0-3 at the break.

The management team (Paddy Doyle, Lar Tyrrell and Niamh Burke) had much to contemplate but whatever instructions they delivered to the team during the interval, they certainly worked the oracle.

That said, the eventual comeback spluttered somewhat throughout the 3rd quarter.  Despite creating a number of good chances, the Longwood/Killyon players snatched at the opportunities and, initially at least, failed to eat into the yawning deficit on the scoreboard.  Eventually after 15 minutes of play in the second half, Cathal McKeown registered a point from a free to breathe some life into the team.

The real catalyst happened a minute later when Justin Coyne, who constantly took the fight to Ratoath, was injured by a loose pull and suffered what looked a serious leg injury.  After some treatment Coyne struggled to his feet and manfully tried to carry on but to no avail.  He finally succumbed to the injury (or so we thought) and left the field of play.  This seemed to spur the players on.  With an additional cause to fight for, they threw off the shackles and tore into the game.

A goal from Stefan Holzner, sandwiched by a couple of frees from McKeown gave them real hope and with 7 minutes to play the deficit was down to five points, not a big lead in a game of hurling.

And then the team and supporters received a further lift when Justin Coyne, doing a remarkable impression of Peter Canavan, re-entered the fray for the closing minutes. Despite practically playing on only one leg, his impact was immediate as he plucked a sliotar from the air and drove it over the bar.

Ratoath were now under serious pressure and struggling to move the ball out of their own half.  As the game entered injury time, the ball broke loose around the Ratoath 21 yard line. It was quickly gathered by Longwood’s Quin Fisher who unleashed an unstoppable shot to the roof of the net. The crowd erupted and the deficit was now down to just a single point.  The ensuing puck out saw Longwood/Killyon gain possession and work the ball up the left wing where they won a free close to the 21 yard line.  Despite the acute angle, Cathal McKeown was up to the task and drilled the free between the posts to bring the sides level.

All eyes were on the referee now and I’m sure many of the Longwood/Killyon supporters would gladly have taken extra time at this stage.  However, there was to be one final dramatic twist as Longwood/Killyon secured possession from yet another puck out.  The ball was quickly launched upfield where it was grabbed by Justin Coyne who slotted the winning score over his left shoulder.

The comeback complete, the final whistle followed soon after, and the victorious warriors were mobbed by elated spectators.

Credit must go to Ratoath who contributed handsomely to what was an enthralling contest. Some of their scores in the opening half were a joy to behold.

To the victors, the spoils.  Ultimately Longwood/Killyon were not to be denied.  They stood up to the challenge, refused to bend and displayed courage, determination and skill in the face of adversity to ensure that the much sought-after Division 1 League trophy would reside in Longwood and Killyon for 2018.